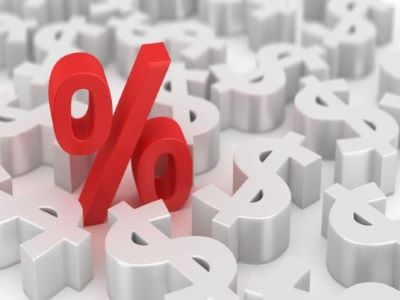 This is part two is a series of three blogs on inflation, interest rates and investing.

In part one of this series we have told the story of how, over a decade ago, central banks turned their attention away from fighting corrosive inflation towards confronting the spectre of a deflationary spiral.  They printed vast sums of money and suppressed interest rates to very low levels – often below that of inflation.  Yet this so called ‘financial repression’ has also encouraged asset prices and debt levels inexorably higher without, arguably, spurring significant inflation, let alone growth.

Owing to the economic damage of the global pandemic response, central banks doubled down with even more money printing.  This time however, their actions have been accompanied by massive government borrowing and spending.  At the same time, pent-up consumer demand and supply-chain disruption has stoked inflation expectations; perhaps sustained higher inflation might make a comeback.  And with inflation fears, interest rates appear to be on the rise.  If this scenario eventuates, what does this mean for investors? As with all things investments, the answer is not straightforward.  To see why, we first need to appreciate that each asset class has an exposure to essentially three fundamental and related factors. 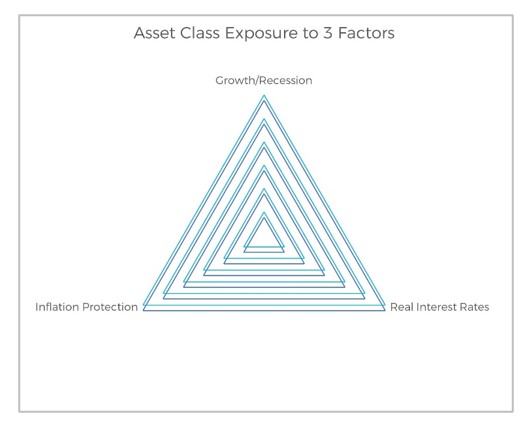 It should be no surprise that the current state of, and outlook for, the economy should have a direct impact on the value of an asset class.  Yet its significance may vary greatly.

Does Vector, a regulated gas and electricity distributor get harmed by weak economic conditions?  The answer is ‘yes, but not much”.  Vector has a relatively low exposure to a recession because it is a “defensive” infrastructure asset which tends to have a stable, bond-like earnings stream.  Economic growth simply means there are usually some more customers to connect to Vector’s grid and pay fixed line charges.  A gas producer or electricity wholesaler/retailer such as Genesis Energy, would tend to be more sensitive because energy consumption, particularly from large industrial users, fluctuates with economic growth.   Genesis’ assets therefore exhibit more “cyclical” qualities than Vector even though it is also core, essential infrastructure.  Of course, Genesis is much less cyclical than say, a fashion retailer – given clothing is generally a discretionary spend that will often be the first budget to be cut in tough times!

At the other end of the spectrum, government bond valuations are usually not affected at all by economic growth or recession per se, unless they materially change the credit quality of the government or its bond supply i.e.  in a recession, government finances are under pressure and will tend to issue more bonds to fund a larger deficit, lowering the bond price.

There are even some assets which are ‘counter-cyclical’, which do well in bad times.  These are admittedly relatively few but may include discount retailers and debt collection agencies.

The interest rate you see on your mortgage or on your term deposit is called the nominal interest rate.  But what you should really care about is the real interest rate since this is your return after inflation.  That is:

The impact of changing real interest rates is felt in different ways.

Obviously if Vector has debt, its interest expense burden will rise as real interest rates rise (unlike banks, it cannot easily pass interest costs on to consumers), lowering forecast profits and its valuation.

But as we discussed in Part 1, all assets are valued relative to real interest rates.   That is, as the attractiveness of low risk fixed interest assets increases when rates rise, the required return on riskier substitutes such as commercial property and shares must also rise.   All else being equal, the value of those assets will have to fall to then achieve the now higher rate of return.  Less obviously, this effect applies to existing fixed interest investments too, even government bonds and term deposits.  This is because their underlying value will immediately decline to allow their expected return to match the now higher real rate of interest.

To the extent that the asset in question has a greater proportion of its returns further into the future than in the near term, the greater the negative impact from rising real interest rates on its valuation.  For instance, commercial property has a lower sensitivity to real interest rates than bare land, since with commercial property there is an ongoing rental stream to earn whereas bare land has holding costs such as rates.  It is only truly valuable in the future sometime when it is sold or developed.  A 1-year to maturity bond has less sensitivity to changes in real interest rates than a 5-year to maturity bond.  Similarly, ‘growth’ companies, where a greater reliance is placed on uncertain future projected earnings (e.g. Tesla) will tend to suffer from rising real interest rates than the likes of a mature, “value” shares such as defensive Vector or cyclical Genesis Energy.

The steady decline in real interest rates over the past three decades has worked in favour of asset valuations for all the reasons described above, but in the opposite direction.

Inflation protection is the ability of an asset class to protect itself from unexpected inflation diluting its true value or purchasing power over time.

Real assets are things you can touch and see, such as hard commodities, land and precious metals.  Intuitively, real assets are fully protected from inflationary rust.  Even Venezuelan-style hyper-inflation does not diminish the true value of a piece of bare land in downtown Caracas but is probably worth a lot less because of the accompanying economic collapse!

Certain liquid financial assets such as inflation-indexed government bonds can also typically provide strong inflation protection.  Shares in essential, regulated infrastructure assets such as Vector, Chorus or other companies that have market power (e.g. Woolworths) where inflation can be fully passed on and commercial property with long term inflation-indexed leases, are all examples of financial assets that should also get the inflation-protection tick.   Conversely, smaller, growth-oriented companies with little market power or industries with inflexible cost and revenue structures, bonds and cash itself are examples of assets that may lose value because of inflation.  Short term bank deposits or corporate debt, where there is an ability to reset the interest rate frequently (e.g. “floating rate notes”) have some modest protection from inflation.

Be aware however that although some of these asset classes lose value in an inflationary period, they equally might add value in periods of deflation.  Nominal bonds are a good example of an asset which does well in periods of unexpected deflation.

The reality is that although we need to isolate and measure an asset class’s sensitivity to each factor individually, we must take into account that asset class returns are a combination of all three factors.  Accordingly, their behaviours in response to different economic conditions can also be quite different from each other.   In our highly stylised diagrams below, we give examples of asset class sensitivity to all three factors together. 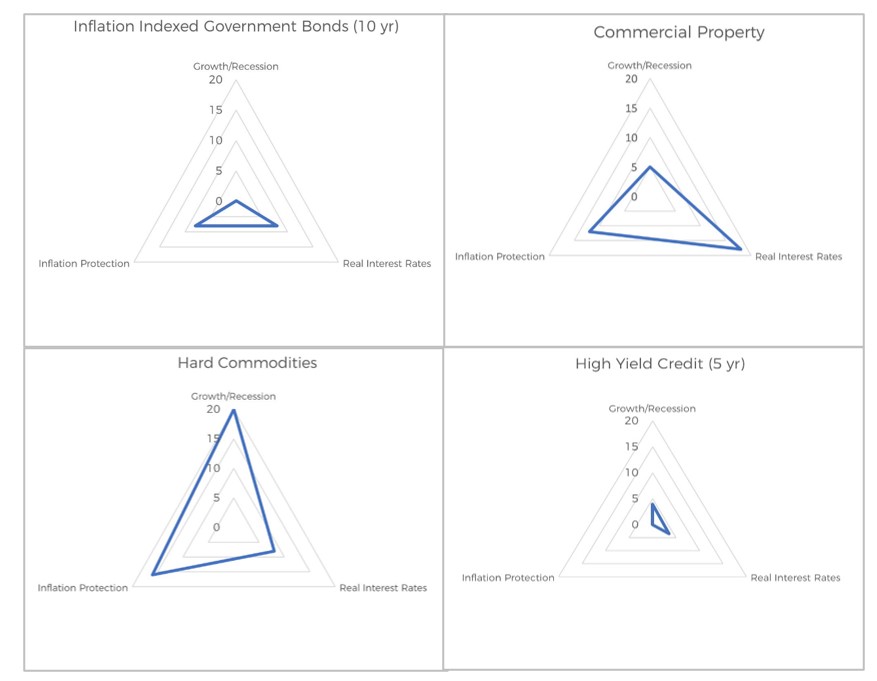 Hard commodities, as real assets also offer good inflation protection but have a much higher sensitivity to growth and recession (soft commodities less so).

Shorter term, fixed rate high yield credit, “junk” corporate bonds offer no inflation protection but have a moderate exposure to real interest rates and to economic growth.  Falling real interest rates might benefit high yield bonds but if the economy is in recession, then those bonds might have a greater risk of defaulting.

We can easily see that each asset class has a different relative and absolute exposure to each of these factors and when compared to other asset classes.  And the characteristics are more valuable in certain scenarios and in extreme scenarios than others. The case for careful diversification of your investment portfolio in an always uncertain future is already evident.

In our final episode we highlight how these factors may tie together in certain economic settings and what implications this has for such asset classes.

To read part one in this series on inflation, interest rates and investing, click here.

What our clients have to say